It was a fun week. 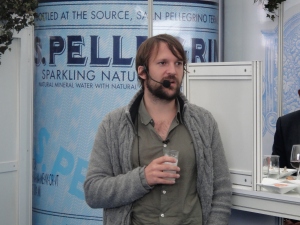 THURSDAY – I was invited to Taste to see Rene Redzepi from Noma. As the chef at restaurant voted San Pellegrino’s Best In The World for the past two years running, he’s kept pretty busy. During the Q&A he said that he doesn’t get to cook at home often, but when he does, he really makes an effort. He said it’s just as important to cook for those you love, when you’re a professional. Cooking for those you love is the essence of having a restaurant, he reckons. (that made sense to me at the time…)

He’s not looking to expand his empire at the moment either, but to continue to innovate at Noma. Building a team up again, and developing the level of knowledge and research they have in Copenhagen somewhere else isn’t on his agenda right now. Bless him, he seemed fairly knackered so I can’t say I blame him. Or maybe public speaking isn’t his thing and he’d sooner be in the kitchen? BTW among the restaurants he rates in London is St John’s, singled out for praise. 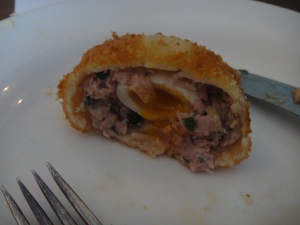 THURSDAY PT II was Pigfest at the Drapers Arms, my first visit there. I was starving on arrival and frankly, the second (yes, I know) Scotch Quail’s Egg was a mistake, in hindsight. It robbed me of the ability to properly appreciate the four other courses that were to come. On another day, though, I think I’d go straight for the motherlode of a bigger portion of belly and caramel-like crackling and skip the other courses, interesting as they were. 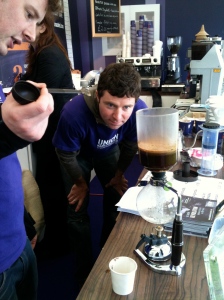 FRIDAY I was back at Taste to go and see Union Hand Roasted Coffee (who I work with) and to meet up with a lovely crowd of bloggers for a quick food pit stop and some coffee tasting. It was buggeringly cold and wet out, unfortunately. We tried syphon, pour over and Aeropress brewing methods, and the coffees included the geisha microlot from Columbia which is really rather special. Kudos to those who made it out in the rain. 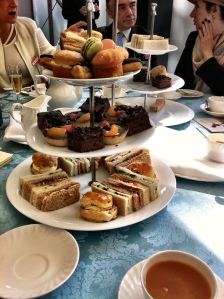 SATURDAY brought afternoon tea in the Royal Enclosure at Royal Ascot – a friend’s father is a member of the Royal Household, which is what my badge also proclaimed me to be for the day (scullery maid, perhaps?) Serious fun in a silly hat, having a flutter, picking three winners (by the jockey’s colours, mainly) and scoring 5/6 on a £9k accumulator pot, weep… I have to say, it was one of the best chocolate brownies I’ve ever had. Fudgy frosting and a distinct hit of hazelnuts – possibly ground, for the batter. The mini Victoria Sponges defeated us. 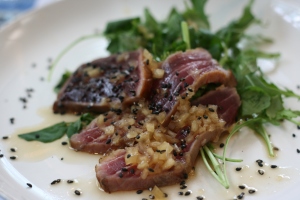 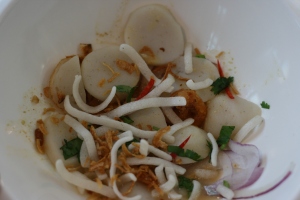 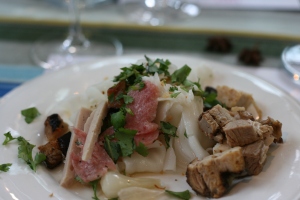 SUNDAY  – Grazing Asia is the brainchild (food baby?) of four talented lovely people. Last Sunday was their inaugural outing, hosted by Danny from Jamieoliver.com at Fifteen in London. It’s a great idea, to bring four different upbringings and culinary traditions together, namely Japanese, Vietnamese, Malaysian and Burmese, plus they were generous enough to put their first menu together to help fundraise for Fifteen’s NYC Marathon team. With help from magical Twitter sponsors the day contributed over £1200!

I hope they manage to find as lovely a space for their next event as Fifteen – tons of photos here and on Uyen’s post, sadly I only captured three of the dishes: above are Luiz’s light citrussy Seared Tuna with Yuzu Ponzu and Sesame Dressing; Mimi’s crunchy texture-filled Spicy Burmese Fishball Salad and Uyen’s utterly comforting, flavourful Baked Crispy Pork Belly with Banh Cuon, Pickled and Fried Shallots, Vietnamese Cured Ham, Thai Basil and Coriander.  I tell you, I would have eaten buckets of each dish, laden with mysterious (to me) ingredients, fresh herbs, exciting combinations. Keep an eye on their website to see when the intrepid foursome are “opening” to the public as this first even was by invitation/donation to Fifteen.

MONDAY –  I went on a diet. I am likely to remain here for some time.

5 thoughts on “A weekend of food”